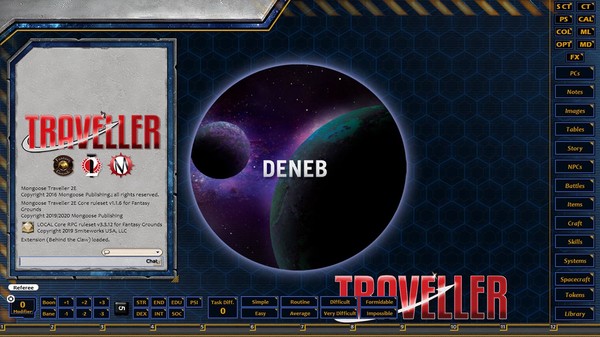 Behind the Claw presents two complete sectors of Imperial space; Deneb and the Spinward Marches. Deneb is bordered by the Vargr Extents and the Great Rift, and has traditionally seen fierce rivalry between its powerful dukes. A long history of compromises and temporary deals has created a fragmented political situation ripe for exploitation by those with the wit and the will… and there is always the threat of corsairs from over the border.
The Spinward Marches is a border region, caught between the Aslan Hierate and Zhodani Consulate, with the tumultuous politics of Deneb at its back. It is the gateway to the Imperial frontiers and the crooads of internal and external politics. Adventure opportunities abound between the frontier worlds of the Marches and the trade hubs of Deneb. Far from the Imperial Core, fortune awaits the bold and disaster lurks for the unwary Traveller.
Includes a huge double-sided poster map of both the Spinward Marches and Deneb sectors.
Adapted for Fantasy Grounds by: Colin Richardson