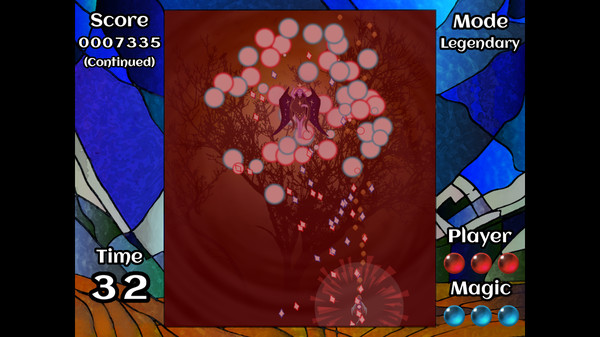 Dodge your way through the crucible of fire! Crucible is a top-down shooter game made by three DigiPen freshmen for their GAM100 class project.

You control a magical dragon in a trial by fire against an older, stronger dragon. Your goal is to dodge through an onslaught of colorful bullet patterns without getting hit. There are twelve patterns in all; you win by lasting through all of them in a row. See the true ending by completing either difficulty without using any continues!

Each bullet pattern can be cleared either by reducing the boss’s stamina to zero or lasting until the pattern timer reaches zero. If the player is hit by a bullet, they can prevent themselves from losing a life point by reacting with a fireball burst attack. The player’s score increases every second they’re alive and whenever they come close to a bullet without touching it.